There have been a number of HR-related controversies surfacing in the news lately. With university and college students now finished final exams and looking for summer work, it seems fitting that the latest controversy under the spotlight is that of unpaid internships.

More and more, students and recent graduates are turning to unpaid internships as a means to kick-start their careers. The idea behind these internships is that they provide real-world experience that allows young people to network themselves, get reference letters, and learn about the industry they are looking to enter into.

These types of internships are common practice in some of the more competitive industries such as journalism, fashion, politics, and technology. In these industries, finding full-time paid work is extremely challenging and candidates need to be able to boast practical experience and the ability to hit the ground running in order to secure a promising job.

Teachers are fighting for a spot

We’re seeing something similar happening in the teaching industry right now. With literally thousands of teachers’ college graduates fighting for a small number of available positions, many are “volunteering” their time in order to gain experience and develop relationships with the right people.

In one case, a married teacher in his forties decided to volunteer full-time for a school in Georgetown for an entire year. This was a serious financial sacrifice for his family. Luckily, the volunteering paid off and he was offered a full-time position the following year. However, not all stories like this have such a happy ending. Is this a realistic option for most people?

Paying to work… for free?

Believe it or not, some recent graduates have even been paying to take part in unpaid internships through organization-led auctions. Right now on charitybuzz.com, a 6-week internship working for United Nations with the NGO Committee on Human Rights is being auctioned off to the highest-bidder. Currently, the bid sits at a whopping $26,000!

This entire unpaid internship controversy was sparked back in April where Vancouver-based tech start-up HootSuite began receiving negative attention on social media networks around their use of unpaid interns: 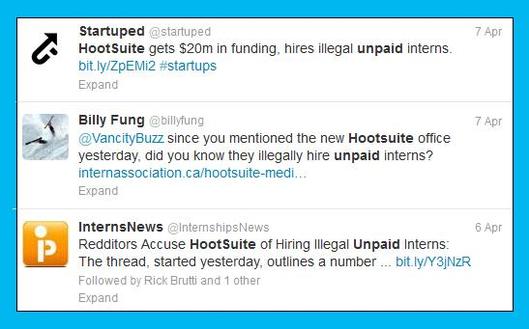 According to the British Columbia Employment Standards Act, it is illegal for companies to hire unpaid interns who do work that benefits the company, unless it is a requirement for completion of a school program. After receiving mainstream media attention, HootSuite reviewed their program, found they were not in compliance with the Act, and ended the practice. They also paid out all current and previous interns.

Back in Ontario, Toronto City Councillor Ana Bailao (left) also found herself in a similar situation after she advertised an unpaid internship in her office. She was forced to withdraw the offer soon after it was discovered and create an online controversy.

As more and more cases begin to surface and the number of organizations using unpaid interns increases, it’s becoming clear that there is widespread confusion over an employer’s legal obligations when it comes to internship positions.

So what’s the deal? Are unpaid internships legal in Ontario?

Canadian employment standards are not explicit when it comes to interns. When it comes to Ontario, the Ministry of Labour has released a fact sheet on the legality of unpaid internships. According to the MOL, the word “intern” is actually just an industry term and it does not hold any significance when it comes to determining how you are paid.

In most circumstances, if you are performing work for another person or company and are not in business for yourself, you are considered an employee and are covered under the Employment Standards Act (ESA). However, there are some exceptions.

Six conditions that must be met for legal upaid internships:

If even one of these conditions is not met, the intern is deemed to be an employee under the Employment Standards Act and, among other things, is entitled to at least minimum wage. (Source: www.labour.gov.on.ca/english/es/pubs/internships.php)

If you are an employer that is currently using an unpaid intern, hopefully this clears up some of the uncertainty around who is and who isn’t exempt from the ESA.