You are here: Home / Business / Primacy of purpose is the most important factor in the effectiveness of a corporate website

Sometimes it can be difficult to step back and view a situation objectively. A restauranteur endeavours to build a website for his establishment, but for some reason he decides that music, animated loading screens, a complete lack of a menu, and a personal note from the chef is what he’ll provide even though it helps nobody. What happened?
The problem is that most people haven’t been taught the most important rule in web design:

Focus on the objective you want to achieve, achieve the hell out of it, and punt on all the rest.

Before considering design aesthetic, the restauranteur first focus is on the actual content that meet the objectives identified in the above scenarios. He will start by listing what he’ll need instead of making it up on the fly:

Why don’t we start with aesthetic and layout before content?
Because it forces the web designer to not only try to predict what will be on the site, it also forces him to estimate the verbosity of the site’s owner. Empty webpage content is a pretty good sign that design came before content.

It isn’t always that simple!”

Of course this is a simplification, but it is a very important one.
Sometimes other things need to be on the website; perhaps a link to the restauranteur’s hiring page, or municipal health documents. What about those?
The answer is that people that know they are not the primary target for a website interact with your site in a different way than your primary users. For example, they look to the bottom of your site first to read the little links because they know that your core message isn’t focused on them. Secondary content should be as unobtrusive as possible not just because it keeps it out of the way, but also because that is where people expect it!
Last words
I’ll end with this demonstration. Simple is an American bank service layer (regulatory requirements prevented them from becoming an actual bank in the short term) that was designed and built primarily by designers and developers. In less than four years their exceptional growth brought them 100k new customers and they were acquired for over $100 million by an international banking conglomerate. The team that built it was around 20 or 30 people.
Simple vs RBC
Simple, a complete underdog (they didn’t even have a banking license!), understood that its website had one purpose: Convince users to switch from their current bank, while RBC looks like a compromise from 50 different department heads.
Designing web aesthetics and interactions may be hard, but understanding the core focus of your web presence is not. It just takes a driven leader to convince stakeholders to unify to the core team mission. 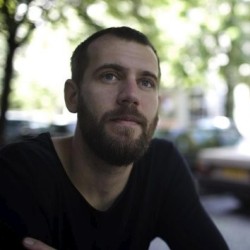